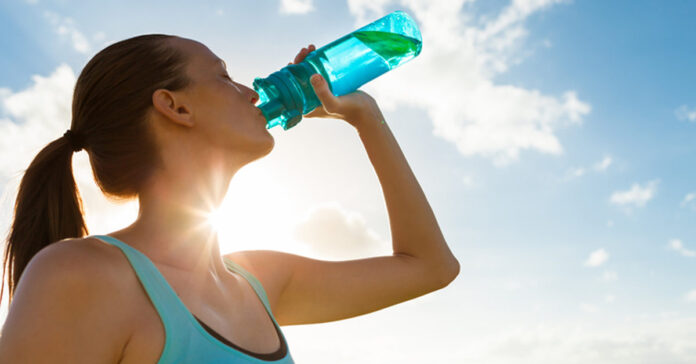 “The water regulates body temperature and lubricates joints. It helps transport nutrients to give you energy and keep you healthy. If you are not hydrated, your body cannot function at its highest level. You may feel tired, have muscle cramps, dizziness or other serious symptoms. – American Academy of Family Physicians ( source ).

The real and supposed functions of water are numerous. Among the most important:

Here is something worth considering: a person, depending on his accumulation of fat, can survive between 30 and 40 days without food, but only between a week and 10 days without water.

Our body loses water mainly through perspiration (sweating), defecation (pooping), urination (urinating) and exhalation (expiration). Other ways we lose H2O include diet, medications, and stress and temperature variations. When we exercise, our body temperature rises and we sweat.

“In reality, sweat “absorbs” heat, which allows us to exert ourselves physically without overheating”.

While exercise can, to some extent, affect the other systems that contribute to water loss, the dramatic increase in sweat production is probably the most significant factor. In the previous note, it is critical (literally) to consume water before, during and after exercising. If we do not get adequate hydration, for whatever reason, serious health problems can arise.

There are 10 Things That Can Happen to Your Body When You Don’t Drink Enough Water During the Exercise:

Your brain requires adequate hydration to function properly. Due to its intricate balance of substances and chemicals, dehydration of the brain inhibits the activity of neurotransmitters, which can impair short-term memory and impair concentration and attention.

Although low water consumption and swelling may seem contradictory, they are not. If the body detects any type of fluid imbalance, a condition called edema may occur. Edema causes fluid to accumulate in the skin and tissues, producing a swollen appearance.

4. Has Pain and Diseases:

Speaking of constriction and expansion, our muscles require the same. Water is also the catalyst here. Cramps are often the way the body tells one to look for water.

5. Your Training is Affected:

Water is essential to produce energy. The body spends this energy very quickly during periods of physical exertion. This physical relationship helps explain why it is also essential to consume water during a workout.

According to a study published in the Journal of Clinical Endocrinology and Metabolism, drinking only 200 ml – a little more than two cups – increases the metabolic rate by about 30 percent in healthy men and women. While the research does not provide any number related to water, metabolism and exercise, it can be safely assumed that adequate consumption of H2O before, during and after exercise will significantly accelerate fat loss.

If you had not paid enough attention to the above, pay attention to this! Although drinking water will not make it eternal, there is overwhelming evidence that it will promote skin health, including skin elasticity and softness.

As you probably know, we sweat profusely during intense exercise. Intense perspiration helps eliminate these toxins. In addition, drinking water aggravates perspiration, resulting in the elimination of more toxins than when our water levels are low.

Of all the antidotes for a big appetite, drinking lots of water may be the best. There are at least a couple of reasons for this. First, water makes us feel fuller, and for longer. It is much less likely that we fancy a treat after drinking a large glass of water. Second, it allows the transport of nutrients, including fiber and protein.

Water is the basis of life. This is true regardless of whether we are exercising or not. That said, we have all heard the unfortunate stories of people who die of dehydration during intense exercise. In unequivocal terms, it is absolutely necessary to consume it before, during and after exercise.

Tips and Suggestions on Water: