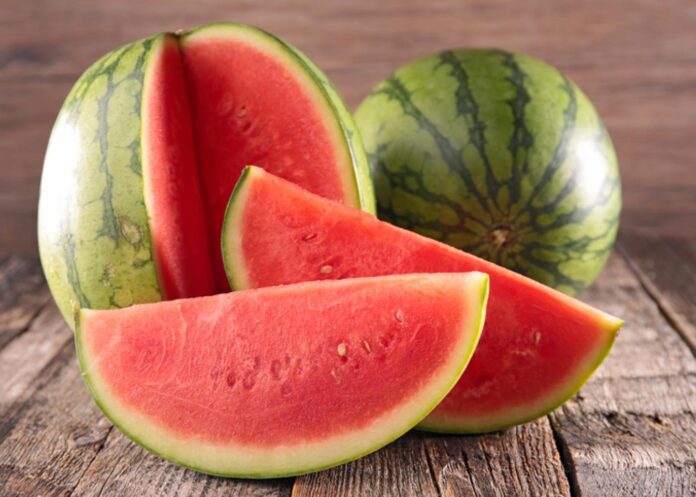 During the summer months, there is nothing like freshly cut watermelon . This juicy and vibrant fruit is packed with vitamins A, B1, B6 and C. It is also a rich source of phytochemical lycopene and the amino acid L-citrulline . Watermelon contains even small amounts of minerals such as potassium and magnesium. It is composed of 92% water, is low in sodium and does not contain fats or cholesterol. One cup equals less than 40 calories. In addition, watermelon fiber will keep your digestive tract healthy and happy. Isn’t it to love her?

The magic ingredients of watermelon:

Watermelon gets its attractive red color from lycopene , a pigment that is also present in tomatoes, guavas, grapefruit and apricots. Historically, tomatoes have always been considered one of the richest sources of lycopene. Research now points to watermelon also as a potent source. However, what makes watermelon special is the availability of lycopene. Unlike tomatoes, watermelon does not need to be cooked to reap the benefits of lycopene. To top it off, red pulp watermelon has 40% more lycopene than raw tomatoes. Be sure to eat ripe pink watermelons for maximum benefit. 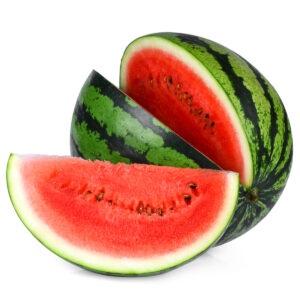 The amino acid L-citrulline is another phytonutrient in watermelon. In the kidneys, it becomes L-arginine . And as arginine levels increase, nitric oxide production is amplified. The latter is essential for vasodilation (widening of the blood vessels). Thanks to this process, citrulline plays an important role in heart health by promoting blood flow and improving circulation. This action also stimulates the liver to eliminate ammonia, lowers blood pressure and helps sexual dysfunction in men. Studies have also shown that watermelon bark, long considered an agricultural residue, is also a rich source of natural citrulline. It could be an even richer source than pulp. However, since the bark is not commonly consumed, scientists are trying to obtain new varieties of watermelon that have more citrulline in the pulp.

The Wonders of Watermelon:

The strong antioxidant properties of lycopene have made it a “star” in the world of health. This means that it has the potential to combat the formation of free radicals that cause cancer . Many studies speculate that regular consumption of lycopene prevents breast, lung, throat, prostate, bladder, ovaries, pancreas and colon cancer. One study notes that high consumption of lycopene reduced the risk of aggressive cancer by 44% in men and the risk of prostate cancer by 25%. In another study, breast cancer cells were treated with watermelon juice. Then, they were incubated in 5% carbon dioxide at 37 degrees C for six days. Other samples were treated similarly with pure lycopene and lycopene was extracted.

“It was found that juice samples were more effective in inhibiting the growth of cancer cells”.

When the body generates more oxidizing compounds than our antioxidant defense mechanism can handle, tissue damage called oxidative stress occurs. Unfortunately, high oxidative stress is the leading cause of diseases such as diabetes and cardiovascular disease. This is where watermelons fit. Due to its antioxidant properties, watermelon lycopene extract can significantly reduce oxidative stress and blood glucose levels. And because patients with hyperglycemia or high blood sugar levels are extremely prone to heart disease, watermelons can also provide protection against heart disease. A study in 14 obese patients (around 58 years of age) with symptoms of hypertension and pre-hypertension showed that a six-week intake of watermelon extract significantly reduced blood pressure levels. This could be a possible reflection of better blood flow. In this case, the amino acids L-citrulline and L-arginine were the most prominent.

It is not uncommon to reach an orange when you have a cold. But if you are looking for a change, you are in luck. Two cups of watermelon provide 30% of your daily vitamin C recommendation, giving you a reason to reach those watermelon slices as well. Vitamin B6, another nutritional component of watermelons, can also improve your immune system. It increases the production of lymphocytes (white blood cells) .11 Lymphocytes produce antibodies that attack invading viruses, bacteria and toxins. 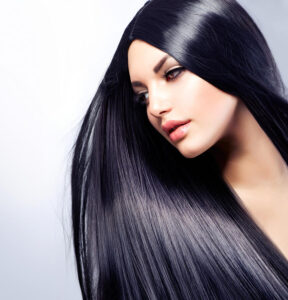 Watermelon vitamins C and A are a healthy fuel for hair and skin. Specifically, vitamin C plays a key role in the production of collagen. This protein prevents wrinkles and protects your skin from damage caused by the sun. In addition, it acts as a tonic for hair growth and volume. As for vitamin A? You can keep your skin supple by preventing dryness and peeling. It does not hurt the fact that vitamin A is also essential for good eye health.

Citrulline not only improves blood flow to the heart. It can also treat (and prevent) erectile dysfunction. It is not surprising that watermelon is sometimes called “natural Viagra.” The citrulline-arginine-nitric nitric oxide pathway promotes the relaxation of blood vessel muscles, increasing blood flow. This is the same basic principle of Viagra. And while impotence is caused by many physiological and psychological factors, higher amounts of nitric oxide could also improve blood flow without side effects.15 Not convinced? In an Italian study, it was found that oral L-citrulline supplementation was effective in the treatment of mild cases of erectile dysfunction. It is expected that new research will continue to provide more concrete evidence.

The benefits of eating watermelons cannot be denied. However, as with all good things, you cannot afford to overdo it. People with kidney disease and diabetics should be more careful. As a diuretic, watermelon can interfere with water retention in people with kidney disease. In addition, when the kidneys do not work properly, the potassium in food tends to accumulate. This can lead to a condition known as hyperkalemia. And since high potassium levels can be harmful, this is definitely something to keep in mind. Undesirable symptoms include irregular heartbeats, reduced muscle control and a complete collapse of the heart. Watermelon also has a high glycemic index, which makes it easily digestible. Unfortunately, this can cause glucose levels to skyrocket quickly. However, limited consumption in a diabetic diet deserves the approval of the American Diabetes Association.

It is vital to keep in mind that excess lycopene can also cause gastrointestinal problems. Consuming too much can cause bloating, nausea, vomiting and diarrhea. How much is too much? Well, there is no authorized study or source that firmly affirms a safe daily dose of lycopene. However, it is widely accepted that 30 mg per day of lycopene is a safe amount. A cup and a half of watermelon contains 9 to 13 mg of lycopene. Therefore, two or three cups of watermelon a day is a safe bet. At the end of the day, you should remember that moderation is everything.