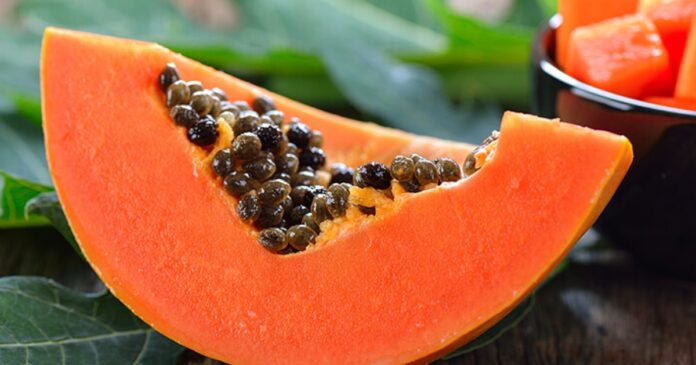 Papaya is a tropical fruit that stands out for its high vitamin C content and low-calorie content. Perfect as a moisturizing snack in the summer, papaya is full of virtues that will make you enjoy full health.

Papaya is a tropical fruit native to Mexico, Central America and the northern part of South America, although today it is grown in numerous countries. Its pulp can be yellow, red or orange and contains edible seeds. When the papaya has the orange rind it means that the fruit is ripe and can be consumed naturally, raw. However, when the bark is green, this means that the papaya has not yet matured and, as a consequence, contains a high amount of latex.

For this reason, you should cook green papaya before eating it, especially if you are pregnant because it can cause contractions. If you do not find ripe papayas in the market, do not worry, buy green papayas and ripen them at home. How? Our friends at Cocina.es explain how to ripen a papaya with a very simple trick that also works for other fruits. By calories, papaya is made up of 92% carbohydrates, 5% protein and 3% fat. However, by weight, papaya is made up of 89% water, which causes carbohydrate levels to drop.

As for nutrients, a small papaya contains:

In addition, papaya stands out for containing an enzyme called papain, with properties to break down meat proteins and soften it. This enzyme is found in the green parts of the crust and is liquefied to mix it with the meat and get it to soften.

1. It is a Powerful Natural Antioxidant:

In general, all fruits and vegetables contain high amounts of antioxidants, substances that fight oxidative stress caused by excess free radicals. In case you don’t know, oxidative damage is a risk factor for diseases such as cancer or heart disease and also contributes to aging. Papaya, because of its fruit condition, is also rich in various antioxidant compounds, mainly carotenoids, natural compounds that act as pigments and antioxidants and are a source of provitamin A. In papaya, the most abundant carotenoid is lycopene, a natural pigment with anti-inflammatory and chemotherapeutic properties in cardiovascular, neurodegenerative and various types of cancer In addition, it should be noted that the lycopene present in papaya is absorbed much better than the lycopene in tomato or carrot, other sources of this antioxidant substance. Finally, several studies have been carried out with a natural fermented papaya supplement and it has been discovered that its antioxidant power can reduce oxidative stress in patients with cirrhosis, hypothyroidism and prediabetes.

Papaya is an excellent source of vitamin C: eating a small papaya and covers your daily need for vitamin C. But do you know what it means for papaya to be so rich in this vitamin?

“The foods with high amounts of vitamin C have been associated with a lower risk of lung cancer, pharynx, uterus, esophagus, stomach and mouth”.

Vitamin C present in food improves the function of the immune system, decreases oxidative stress, reduces inflammation levels and helps block and prevent the formation and activation of carcinogens. There are also indications that the lycopene found in papaya has anti-cancer effects that can help prevent various types of cancer and slow the growth of tumors. The potent antioxidant capacity of lycopene fights the damage caused by free radicals, a risk factor for the occurrence and proliferation of cancer. Likewise, papaya also contains another carotenoid with anticancer effects: beta-carotene, which has been shown to prevent prostate cancer.

Inflammation is a natural mechanism that your body uses to protect you from infections and other diseases caused by bacteria, viruses or other pathogens. However, when this stage of inflammation lasts longer than usual or, worse, it manifests inside your body without apparent symptoms, it can become a serious problem. Generally, all foods rich in antioxidant substances and compounds have anti-inflammatory properties, to a greater or lesser extent. In papaya in particular, it is lycopene, among other carotenoids, that contributes to lower levels of inflammation in the body. Some studies have proven that diets rich in fruits and vegetables with high antioxidant content improve some levels of inflammation such as C-reactive protein

Eating papayas can often improve your visual health and prevent certain eye diseases. Thanks to its high content of vitamin A from provitamins A, such as beta-carotene or betacriptoxanthin, papayas contribute to better visual health. According to the World Health Organization, vitamin A deficiency is one of the leading causes of childhood blindness in many developing countries. On the other hand, papaya also contains certain amounts of lutein and zeaxanthin, two other carotenoid antioxidants associated with a lower risk of age-related macular degeneration and cataracts.

5. Decreases the Risk of Heart Disease:

I have already commented that papaya is a very rich source of antioxidants that, among other things, help prevent heart disease. Some studies suggest that lycopene, thanks to its ability to fight free radicals and reduce oxidative stress, contributes to a lower risk of heart disease. But papaya also contains a very high amount of vitamin C, which also acts as an antioxidant and which has also been shown to reduce the chances of developing heart and chronic diseases. Other research has obtained promising results in the consumption of fermented papaya in the form of supplements: reduced levels of inflammation and a better ratio of LDL cholesterol: HDL, which translates into a lower risk of cardiovascular disease.

There is some scientific evidence confirming that regular consumption of papaya can prevent digestion problems some people suffer. Throughout history, papaya has been used as a natural remedy for constipation or other digestive disorders in various areas of the tropics. In a study with a papaya-based formula, the subjects analyzed showed a clear improvement in symptoms such as swelling or flatulence thanks to the content of papain, a substance that promotes digestion.

7. Reduce the Marks of Aging:

Aging is a process that develops over time, but is accentuated with the oxidation that occurs in our body. Foods rich in antioxidants, such as papaya, can reduce the signs of aging that appear on your skin, for example, wrinkles or flaccid skin, by combating oxidative stress. In addition, it has been confirmed that both vitamin C and lycopene, two very abundant substances in papaya, improve the appearance of the skin and reduce the marks of aging. Finally, the topical application of papaya has also been used with very good results in the healing of ulcers and other skin wounds

Eating papaya is an excellent and delicious way to fight diseases such as cancer or heart disease. Add it to your diet as you like: fresh and natural, in juice or smoothie, in salads and even as an ingredient of both salty and sweet dishes.