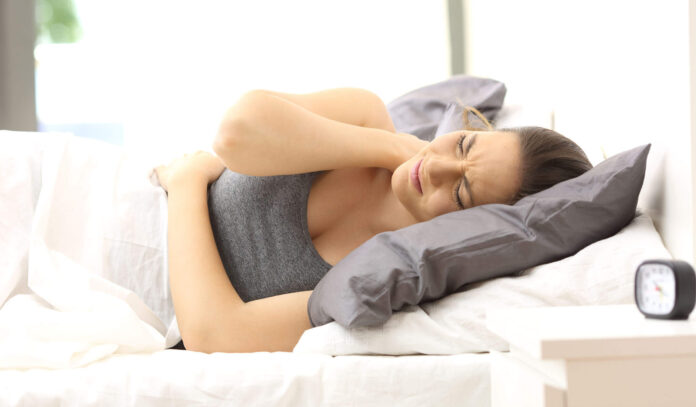 Fibromyalgia, also known as fibromyalgia syndrome or FMS, is a medical condition that is known primarily for the extensive musculoskeletal pain it causes, it is also accompanied by depression problems, sleep problems, fatigue and memory.

Although fibromyalgia can also occur in men and women they are 10 times more likely to have it. Below we will talk in detail about the symptoms, but you can also visit the following article on how to treat fibromyalgia.

What are the Main Symptoms of Fibromyalgia?

Here is a list of the most common signs of Fibromyalgia

Is Generalized Pain the Most Common Symptom of Fibromyalgia?

Although the symptoms that make up the fibromyalgia syndrome are quite varied, the main characteristic and the most widespread symptom of this medical condition is extensive pain throughout the body. Studies have shown that almost 97% of fibromyalgia patients suffer from this symptom and is often the reason they receive notices and consult a doctor. This pain is often described as a generalized pain in the muscles of your body.

“Some people may experience this pain constantly, while others have it and disappear. The level of pain can vary and can be boring and acute”.

What is Pain at the Tender Point or Trigger Point Associated With Fibromyalgia?

Along with the constant or recurring body pain described above, people suffering from Fibromyalgia also experience pain in sensitive points in certain areas of the body around the joints. When pressure is applied to these tender points, superficial pain will occur in the tissue, it is actually the surrounding tissue and not the joints that hurts. This is not random and occurs in certain areas of the body, below I have listed these areas.

These Tender Points May Include:

What Kind of Fatigue Can You Expect?

After pain in the body and pains of the trigger point, fatigue is a widespread symptom among those suffering from Fibromyalgia. What concerns fatigue here is a fatigue that continues to endure, even when the patient is well rested. Not only is it weakening physically, but it is also very mentally exhausted. It can affect your willingness to work, exercise, and perform mundane tasks such as shopping and even your desire to have sex.

What Kind of Sleep Problems Can I Experience?

For many people with fibromyalgia, sleep is never enough. First, even an adequate amount of sleep can cause a feeling of tiredness. Second, people who suffer from Fibromyalgia have trouble achieving adequate deep sleep. This is because during sleep people suffering from fibromyalgia are interrupted by brain activity that occurs in the form of constant explosions. Therefore, the amount of time one can spend in a deep sleep is very limited.

More than Seventy-Five Percent of People Suffer from Morning Stiffness:

For most Fibromyalgia, morning stiffness is a daily occurrence and, therefore, is one of the main symptoms of Fibromyalgia experienced by the majority of those affected. This stiffness affects a large part of the body and usually lasts about 15 to 20 minutes, but it is known to last for hours.

One in Four Fibromyalgia Patients Suffer from Depression:

Why do so many people with Fibromyalgia have depression? The stress of having to deal with constant pain, fatigue and other problems can lead many to become depressed and lose hope. The fact that many become less social and less active when this happens also makes depression much more likely.

Other Symptoms May Also Occur:

Other symptoms of fibromyalgia include: swelling and tingling in the hands, intestinal irritation, menstruation problems, urinary problems and other symptoms.

I Have Some of These Symptoms, Do I Have Fibromyalgia?

Having some or all of the above symptoms may or may not mean that you have fibromyalgia. Although it is a good idea to familiarize yourself with this condition, you should consult a specialist doctor before taking other measures.

Why are Women Much More Likely to Get Fibromyalgia Than Men?

There is no clear answer to this question, experts can only observe the reality that it affects women more than men. Of the six million Americans who have the disease, between 85 and 95% of them are women. Studies have also shown that African-American women are more likely to get Fibromyaglia than other Caucasian women, however, experts are not sure why.

What are the Symptoms of Fibromyalgia in Women?

The main symptoms of Fibromyaglia in men and women are widespread pain throughout the body. Both men and women may also experience problems sleeping, fatigue, pain when pressure is applied to certain trigger points and a number of other symptoms that I have examined in more detail here. There is still no firm evidence to suggest that fibromyalgia symptoms are different between men or women. However, many believe that men have a greater tolerance for pain and, therefore, are more likely to have milder cases of the disease than women.

How can Fibromyalgia Affect a Woman’s Health?

Here is a fairly complete list of Fibromyalgia symptoms that can be a good resource for anyone looking for a symptom checklist. If you suffer from fibromyalgia, you are unlikely to experience all these symptoms, but you will definitely have some of these.